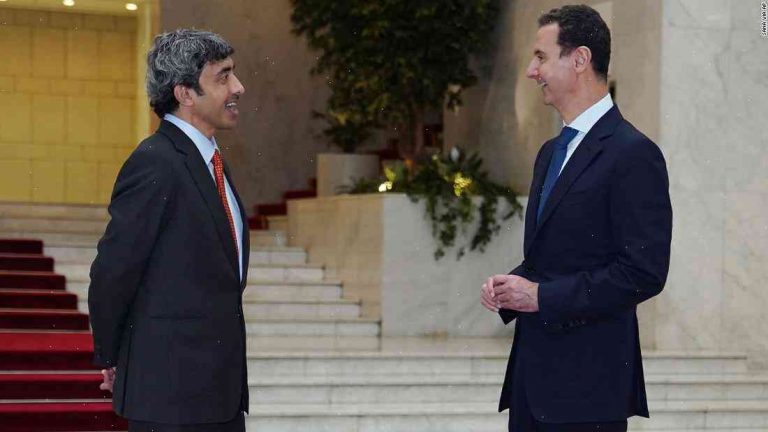 The Emirati foreign minister, Sheikh Abdullah bin Zayed al-Nahyan, has received a rare visit from the Syrian president, Bashar al-Assad, on the first known face-to-face contact between the two men since the start of the Syrian civil war, state media said.

Damascus is involved in ceasefire talks in de facto opposition-held Idlib, the last major insurgent-held province and the only one in which fighting is still raging.

On Tuesday, state news agency SANA said the two officials, arriving separately, held talks in Damascus and said Damascus and the UAE have agreed to cooperate in the war against terrorism. They also discussed “economic and investment projects” in Syria.

The meeting came as the Arab League called for a 30-month ceasefire and an end to “all armed terrorist groups” in Syria and urged the Syrian army to open communication with opposition and rebel groups and open areas and places to journalists.

The UN announced on Tuesday a “surge” of aid deliveries. The statement called for 45 trucks carrying food, hygiene kits, mattresses and blankets to reach the opposition-held eastern Ghouta suburbs of Damascus. The convoy, said to be the largest to go there since the beginning of the Syrian civil war, was to land in Douma, a suburb of the capital, on Wednesday.

It is unclear why the UAE has given Assad a warm welcome, and not his Western allies, despite a UN-backed Syria peace conference in Geneva that the Emirates attended last year without invitation.

According to a US official, Syria’s ambassador to Russia, Bashar Ja’afari, would attend a UN-Arab League meeting in Qatar on Wednesday.

Despite last year’s conference, many countries have not had high hopes for the indirect talks led by Russia and the US, arguing that Russia and Assad are merely negotiating with themselves in Assad’s favour.

The UAE and Syria are both allied with Iran, Syria’s closest ally. Gulf countries also criticise Iran’s support for Assad and its interference in the internal affairs of its neighbours. The UAE has backed a number of rebel groups fighting Assad’s forces.

In February, Assad’s visit to Oman was in line with a regular pattern of government visits by the ruling family from one of the seven Gulf Cooperation Council (GCC) member states to the neighbouring country, a sultanate located at the mouth of the Gulf, for talks with Sultan Qaboos.