As young as he is, Italian rider Pecco Bagnaia already is a man with a cause. And that’s been very helpful, he says, in building up his racing style. The 20-year-old picked up his… 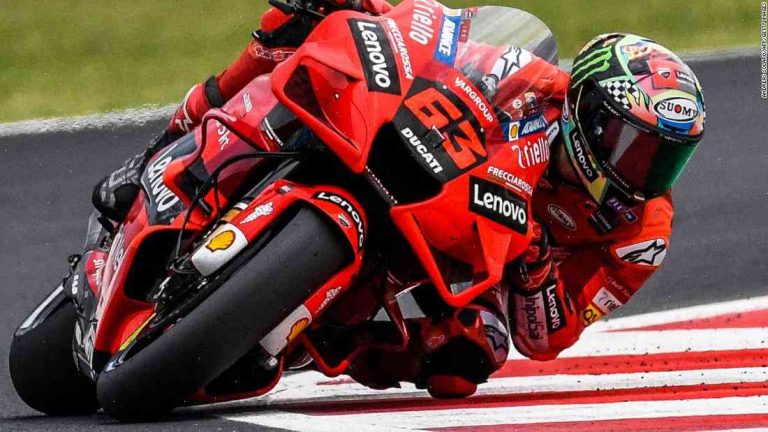 As young as he is, Italian rider Pecco Bagnaia already is a man with a cause. And that’s been very helpful, he says, in building up his racing style.

The 20-year-old picked up his first MotoGP championship as a rookie last season, signing with Team Monster Yamaha Racing for the next three seasons. While the team did not win a race last year, Bagnaia helped the company to its best ever season — and he believes that should only improve, with the team positioned fourth in the class after six races.

“To be honest, we’ve improved a lot,” he told FOXSports.com recently. “And obviously when we come here it’s going to be a harder test because of the road and the bridges, but we are already able to come here and feel well. The bike is fine and we are moving forward.”

While the team is satisfied with how the bike was shaping up at Vallelunga, the mood was decidedly downbeat after a rash of crashes at the track. Simoncelli and Luzzi — who was clearly having his own problems — were hit by multiple rough miles, while Michele Pirro hit his head and Barry Sheene took a horrific spin and landed on a barrier. Among the other victims was Cal Crutchlow, who smashed the windshield of his bike.

“The Valencia track was great because the tires improved quite a lot,” Bagnaia said. “We made it better, the opportunity was good. The track was smooth, but the bikes, we have a problem. But we are working hard on the track and we’ve come up to that so we have to keep going forward.”

Having won the rookie title and two subsequent race wins, it’s hard to imagine Bagnaia staying a rookie for too long, but it’s worth remembering that Rossi overcame a lengthy apprenticeship to become a legend. Now look at Aldo and Andrea Dovizioso, who spent several years at the bottom of the FIM European Championship standings before starting to tear up the shop.

And speaking of Rossi, even though he’s fifth in the standings after a slow start, Bagnaia isn’t expecting the nine-time champion to lose his way.

“In my opinion, in this sport you never know,” he said. “I think the important thing is to continue doing the same things. … He’s a fighter and a champion so he’s always thinking forward, and he is on the limit every race, so why not?”

Bagnaia, whose street-fighter style is already a hit in Italy, is already thinking far into the future.

“We are talking three years from now. I’m thinking right now about the next season, so I’m thinking ahead,” he said. “I’m trying to learn how to manage the bike and to keep developing the bike.”

Yamaha recruited Ario Reinhard, who could be the team’s first factory rider since he started at the factory in 2007, for this season. Bagnaia says he has a good relationship with Reinhard but insists he is happy to continue with his own team.

“He’s a great rider and we communicate very well,” he said. “We are racing more or less together from the rookie stages and we just talk about tactics and that’s all. He is a good rider and I’m very happy to race with him and learn a lot from him.”

Pecco, who has nine career wins, looks to stay a rookie and promote Italian cycling while making it on the MotoGP podium.

And he is planning for the future in a way that a young Italian hoping to make it in Europe rarely can.

“I plan to become a manager,” he said. “I just start working with the team from July and since then I have already worked with seven riders in all stages. … It is a very useful experience, so it’s helping me a lot. I think it is good for my career to be working with new riders.”

Armed robbers escape with $100,000 in Louis Vuitton merchandise after firing shots at store in Chicago